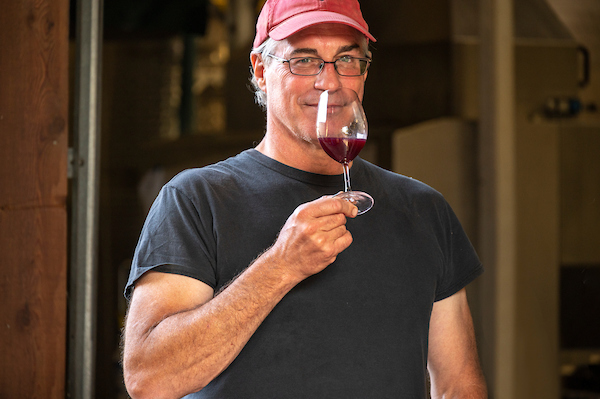 Educated as a chemist, Tony Rynders began working in the wine business in 1989 in the lab at Mirassou Vineyards in San Jose, CA. Catching the wine making bug, Rynders realized that it was his true calling. Wanting to understand the science, as well as the art, of wine making, he attended the University of California at Davis, obtaining a Master’s degree in Enology and Viticulture in 1992.  The same year that Angela and Sanjeev took their first vacation to Napa Valley.

During his tenure at Domaine Serene, Rynders became one of the most highly acclaimed winemakers in America. Over 10 years, Rynders developed more than 25 different labels for Domaine Serene. Striking out on his own, Rynders launched a successful wine business called Tony Rynders Consulting and subsequently Tour de Force Wine Company to provide custom crush services. In 2008, he launched his own label, Tendril, with a focus on Oregon pinot noir. Tony bought the entire first harvest of Saffron Fields Vineyard in 2009, starting a business relationship that continues till today and includes making Saffron Fields Vineyard wine.

Sanjeev and Angela attended their first International Pinot Noir Celebration (IPNC) in 2005.  On the first day, they were part of a group sent off-campus to a local winery.  As their bus headed out of McMinnville, Tony Rynders stood up briefly and introduced himself. This meant their bus was going to Domaine Serene. At lunch, there were empty chairs across from Sanjeev and Angela and happily Tony came and sat in one.  While munching on the delicious multi-course meal served by IPNC staff, Tony asked them some questions.

“Why are you here? Are you an industry person or someone who just enjoys wine” asked Tony.

“We just bought a grass-seed farm and plan to plant a vineyard. Maybe, we’ll make wine one day,” replied Sanjeev.

“You got any farm experience?”

“That’s funny.  Both our parents were raised on farms and are shocked that we would want to own and live on one. No, we are engineers, who love pinot noir.”

“You have any winemaking experience?”

“He looked at us with his eyebrows raised and said ‘Well, good luck with that.’ Then he got up and started his lunch talk,” says Angela

Two days later, they were leaving the IPNC Sunday brunch and Angela saw a badge upside down on the walkway to the parking lot.  Angela picked it up.  It was Tony’s badge.  She showed it to Sanjeev and stated confidently, “Tony is going to make our wine one day.”

She retorted, “This is a sign. He will make our wine one day. There’s no other reason for me to find this.”

Tony became their first and only winemaker in 2010 after buying their entire first harvest for his own label in 2009.